Eat This, Not That, For Amazing Abs 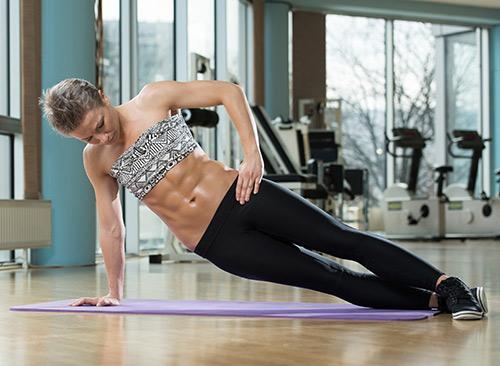 Get swimsuit-worthy ripples by summer with these 8 slimming swaps. (Photo: Shutterstock)

Here are four proven and effective ways to get abs fast:

Make 8 simple swaps, eat steak and potatoes, and sacrifice nothing—and lose up to 16 pounds in 14 days.

Sure, the 600 sit-ups sounds tempting. (Hey, that’s only 18,000 a month. Come on!) But at Eat This, Not That!, we’re all about getting the hot, sexy belly you want while eating the hot, sexy foods you want—and not spending half an hour each day doubled over in physical agony. So we identified some easy swaps that will turbocharge your metabolism, tame your hunger and set your body’s belly-burning mechanisms to automatic—inspired by The Abs Diet creator David Zinczenko’s new book, Zero Belly Diet. Get ready to reveal the lean, firm belly you desire–coming soon to a pool party near you!

Eat This for Abs!

(1 large) Calories 17, Total Fat <0.1 g, Saturated Fat 0 g, Sodium 55 mg, Carbs 0.2 g, Fiber 0 g, Sugar 0.2 g, Protein 3.6 g Put down the calculators, calorie counters! Yes, you get 61 more calories from a whole egg, but calories aren’t the only important thing when it comes to weight loss. The magic of the yolk comes from a B vitamin called choline, which acts directly on the genes that cause fat storage in the abdomen. (One reason heavy drinkers have bloated bellies is that alcohol depletes choline, causing weight gain around the liver.) Plus, the yolk is also loaded with heart-healthy vitamin D. If the thought of eating whole eggs still makes you uneasy, make a scramble with one whole egg, and two or three egg whites. And lose three inches from your waist using this essential list of The 9 Best Flat-Belly Superfoods. Eat This for Abs!

Thanks to the popularity of low-carb diets, white potatoes have been unfairly blacklisted. But spuds are studs when it comes to keeping you full—even more satiating than traditional healthy eats like brown rice and oatmeal, an Australian study found. The more satisfied you feel, the less apt you are to graze throughout the day and take in excess calories. But not all varieties of potatoes are created equal. A baked potato with its nutrient-filled skin is much different from the caloric clown car known as a French fry. In fact, one study found that French fries ranked among the top foods most associated with problematic, addictive-like eating behaviors—their lethal balance of salt and fat means eating just a few is nearly impossible. Eat more old favorites—and lose belly fat while doing it—with this list of 6 “Unhealthy” Foods That Actually Help You Slim Down

The word “oatmeal” is not synonymous with the word healthy—as the existence of the oatmeal cookie proves. To prove this point, researchers divided study participants into two groups: One group was given a 363-calorie breakfast of oatmeal, while the second group was served a ready-to-eat oat-based cereal like Quaker’s Squares, with the same number of calories. When asked to rate their appetite after eating, the oatmeal-eating participants said they were significantly less hungry than their cereal-eating counterparts—even four hours after breakfast! The bottom line: Real oatmeal—the stuff you cook on the stovetop—will melt away pounds far more efficiently than any oatmeal-affiliated foodstuff can.

How would you like to drink a glass of 42 melted M&Ms? Apple juice is one of the most sugar-laden of all juices, and most of its sweetness comes from fructose, a type of sugar associated with the development of belly fat. Straight-from-the-tree apples, on the other hand, are one of the best fruit-sources of fiber, a nutrient proven to be integral to reducing belly fat. In fact, for every 10-gram increase in soluble fiber eaten per day, visceral fat was reduced by 3.7 percent over five years, a recent study found. Bonus: Of all varieties, Pink Lady apples are ranked highest in antioxidant flavonoids, which can help protect against cardiovascular disease. Learn more simple tricks in the most-shared Zero Belly: 14 Ways to Lose Your Belly in 14 Days!

Here’s the rule of meat: protein good, saturated fat bad. Protein builds muscle and revs your metabolism, helping to melt away belly fat and reveal your abs. Saturated fat, on the other hand, does the opposite: In a 2014 study in the journal Diabetes, researchers found that people who ate foods higher in saturated fat gained primarily abdominal fat—twice as much as those who ate the same amount of calories from foods containing unsaturated fats. The reason: according to the study authors, genes involved in regulating metabolism, insulin resistance, body composition and fat cell differentiation behaved differently in test subjects depending on the kind of fat they ate. For the abs-building protein without the belly-building sat fat, look for lean proteins like sirloin or top loin steak, poultry or fish.

Eating just 1 teaspoon of low-cal mustard can increase your metabolism by up to 25 percent for several hours, according to researchers at England’s Oxford Polytechnic Institute. Ketchup on the other hand, is a calorie and sugar trap. “Just one measly tablespoon has up to four grams of sugar and 20 calories—which might not seem like a lot—but the average consumer will douse their food with at least four or five,” explains Lisa Moskovitz, R.D., founder of The NY Nutrition Group. “Plus, it’s loaded with high fructose corn syrup, which has been shown to increase appetite and, over time, lead to health problems such as obesity and diabetes.” Yikes! Are beware: You may be eating the 11 Foods Diet Experts Won’t Touch—click to be sure.

Greek yogurt is one of the best belly-flattening foods out there, but be wary of the fat-free versions. To make up for a lack of fat, even the best brands wind up with added sugar—in this case, more than a Snickers’ Bar worth of the sweet stuff. And if you’re at all lactose intolerant, the bloating caused by yogurt will only succeed in making your belly rounded, not ripped. If you’re finding this out a little too late, drinking kefir can help reduce some of the damage. Sipping the beverage can reduce bloating and gas brought on by lactose consumption by 70 percent, according to Ohio State University researchers! We like Lifeway’s Veggie Kefir line because each bottle has 110 calories, only 15 grams of sugar (which is low in the flavored kefir world), and a full serving of veggies. Kefir’s stomach-flattening effect is why it ranks among our 12 Foods That Will Make You Look Better Naked.

Rich in muscle-building protein, satiating fiber and vitamins A, C and K, kale is one of the trendiest—and healthiest—veggies out there. Even so, the dark, leafy green does have one notable downside: it’s loaded with a sugar called raffinose that remains undigested until bacteria in the gut ferments it. Once this process begins, the stomach produces a gas, that makes you bloat and covers up your hard-earned abs. But don’t shun all the greens in the produce aisle just yet. Spinach is one green that you’ll want to reach for. It’s not only filled with water (which can help keep you full), but also contains powerful appetite-suppressing compounds called thylakoids. Basically, this low-cal veggie can help you fill up without filling out. Add some to a breakfast smoothie, morning omelet, lunchtime sandwich or use it to make a dinner salad in lieu of your go-to greens.